Get Started →
Learning Center > Medicare vs. Medicaid: What is the Difference?

Medicare vs. Medicaid: What is the Difference? 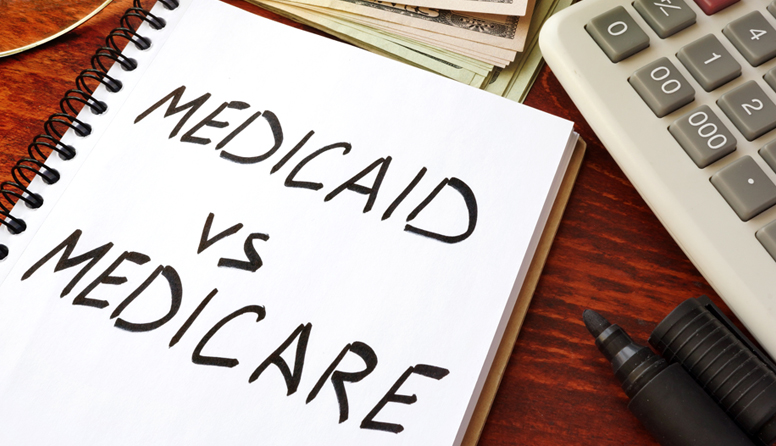 There are several important differences between these two programs, which mainly involve the way in which you qualify for coverage, and who is responsible for running the program.

Medicare vs. Medicaid: The Simularities

Medicare, developed in 1966, is a government program that was created to help retired Americans get affordable health insurance. The basic program is now known as Original Medicare. Original Medicare is split into two “parts.”

Part A covers you for inpatient services and procedures, including:

You can think of Part A as coverage for when you’re admitted to a facility for care for longer than one day.

How much does Medicare Part A cost?

When you use Medicare Part A, you have to pay for certain costs out of your own pocket. The biggest expense under Part A is the inpatient hospital deductible. For 2021, the deductible is $1,484. This is your share of costs for the first 60 days of Medicare-covered inpatient hospital care. After 60 days, your share will be $371 per day.

If these events are separated by more than 60 days, you’ll pay the deductible more than once.

How much does Medicare Part B cost?

Like Part A, you’ll pay some costs out of pocket for Part B services. The two most common expenses are:

An important fact to keep in mind is that there is no cap on the amount you could pay in a year. If you go to the hospital several times, or have a major illness, you’ll pay out of pocket the whole year. This is not how most other health insurance works. Most Medicare Health Plans like Medicare Advantage have an out-of-pocket maximum limit. Once you hit the limit, the plan pays for everything as long as it’s a covered service.

Many people worry about spending too much money on Medicare. The lack of a spending cap and prescription drugs are two reasons people often add additional coverage.

In addition to annual spending caps, both Medicare Advantage and Medigap plans help pay for the costs you’d normally pay under Original Medicare:

Who is Eligible for Medicare?

Medicare is health insurance for:

If you receive Social Security or disability income for two consecutive years, you’ll enter Medicare automatically, as long as you qualify based on citizenship or residence.

Unlike Medicare, Medicaid is based on income and asset levels rather than age.

There are two types of Medicaid coverage: traditional and expansion. But we will only cove the basics of traditional Medicaid since most people with Medicare are not eligible for expansion Medicaid.

Who is eligible for Medicaid?

Eligibility for traditional Medicaid is based on your income, family size, and asset level. Each State can set its own requirements, but the income limit is generally 133% of the Federal Poverty Level.

In addition to having a low income, you must have limited assets. The limit for most individuals is $7,730, but it doesn’t include certain assets like your home or car.

In general, for Americans aged 65 or over, Medicaid is designed for people who are:

What Does Medicaid cover?

If you qualify for Medicaid, you’ll receive low-cost health insurance from your state, which may cover you for:

Benefits can vary by state, but Medicaid covers vision, dental, and hearing services in many cases. You may have a small deductible to pay each year, and you might have very low copayments or coinsurance.

Can You Have Medicare and Medicaid at the Same Time?

Yes, it’s possible to be covered by both programs. A person who is eligible for both programs is called dual-eligible (you might also encounter the term “medi-medi”).

How Does Medicare and Medicaid Work Together

When you have both Medicare and Medicaid, you need to know that Medicare is your primary insurance. Medicaid is the secondary, or backup, coverage. This means Medicare pays most of the cost for services, and Medicaid pays the rest.

In many cases, dual-eligible beneficiaries will receive services but have no out-of-pocket cost. But they must use doctors and facilities that accept both Medicare and Medicaid patients.

One of the most valuable benefits of being dual-eligible is the Medicare Savings Program (MSP), which is based on a range of income levels.

If you qualify for the MSP, your state will cover all or a portion of your Medicare premiums. Depending on your income levels, you could get help with Part A premiums, Part B premiums, or both Part A and Part B premiums. Or you may have no premium payment for your health insurance coverage.

If you have dual-eligibility for Medicare and Medicaid, you can receive discounts on prescription drugs because dual-eligible beneficiaries participate in a program called Part D Low-Income Subsidy Program, or often referred to as Part D “Extra Help”.

With Part D Extra Help, your cost for medications could cost as little as $9.20 for brand name drugs, and $3.70 for generics.

You also must enroll in a Medicare Part D prescription drug plan. In fact, you will automatically be enrolled in a plan if you don’t choose one yourself, but you have the freedom to change plans if needed, though there may be time restrictions on when you can make the change.

Many insurance companies also have plans designed specifically for dual-eligible people. These plans have the lowest out-of-pocket costs of any Medicare Advantage plans. They can also provide other benefits like transportation to and from medical appointments.

Medicare vs. Medicaid: Understanding Your Options

Being eligible for both Medicare and Medicaid can be a valuable benefit. Your costs will be capped for all kinds of services and procedures, and your prescription drug costs will be much less than if you only qualify for Medicare.

To understand your options, call 800-620-4519 or you can find and compare Medicare Advantage plan online using our plan comparison tool. Just enter your zip code to get instant Medicare quotes for available plans in your area.